A Scientist's God: New Arguments for the Existence of God and Our Soul. A scientist’s personal exploration 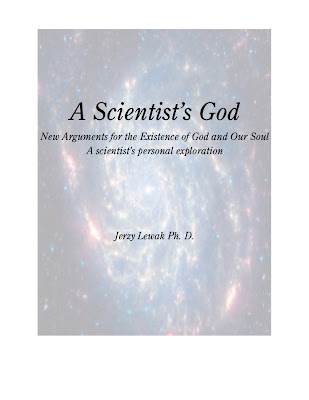 
Undeniable Proof Of The Existence Of God And Our Spirituality.

A scientist with more than 50 years experience in science and in thinking about the subject, has just published the Kindle book “A Scientist’s God,” in which he claims to prove beyond reasonable doubt that God exists and that we are spiritual beings. Proofs use only science and logic applied to life’s experience.

A number of books, articles, and TV programs have recently featured prominent scientists proclaiming that a belief in God is unscientific or worse. This book points out their errors in logic and assumptions, which are often not stated, but simply implied. The book is not about any particular religion. Its goal is to show how wrong some scientists, such as Richard Dawkins and Nobel Laureate Herbert A. Hauptman, are when they deride with disdain and ridicule a belief in God and our spiritual nature. The book is intended for those who have been swayed by such pronouncements to disbelieve and for anyone who would like to understand how science is compatible with a belief in God and our spiritual nature.

Using new logical arguments and science it clearly shows that a belief in God is not only compatible with, but is even supported by methods of science and that arguments for a belief in God are convincing beyond reasonable doubt. It proves that our subjectivity and consciousness are conclusive evidence of a non-material soul. That evolution, the Big Bang and even possible multiverse theories, may be reasonable explanations of the methods of creation used by an intelligent God. It also explains possible reasons why God would choose such methods of creation. It shows how unreasonable it is for us to use gaps in our understanding of these science theories as proofs of a “God of the gaps.”

In analogy with the scientific method, by using various models of reality, it explores the various difficult questions and apparent contradictions associated with belief in a loving personal God. It ends with a cyber world model of another reality which provides possible answers to all the perplexing questions about life and shows how unrealistic it is to believe that there is no ultimate reality higher than that of this world.

The book makes a clear distinction between objective and subjective truth, a distinction that seems to have been ignored in recent discussions of this topic. This enables the writer to come to the final conclusion that believers and disbelievers are really both believers in a creator of all reality, but believers claim it is an intelligent, purposeful, and all powerful creator God, whereas disbelievers claim, often only by implication, that it is an unintelligent, purposeless, dumb “machine.” Both tenets are based on belief.

The book points out that believers in God can answer our important subjective questions and millions of otherwise unexplained human experiences, whereas believers in a dumb machine do not have a chance!

Published as a Kindle book, it may be borrowed, or purchased at the Amazon Kindle store.

If after reading the book you would like to express your opinion, ask a question, or exchange ideas about the topics in the book, I invite you to post these here.
I look forward to your comments.
Jerzy Lewak
Posted by Jerzy at 8:50 PM 2 comments:

Jerzy
Del Mar, California, United States
Dr. Jerzy Lewak is Professor Emeritus from the Department of Electrical and Computer Engineering, at the University of California at San Diego La Jolla. He is founder of two software companies. He has over 50 years experience in the science fields of Theoretical Physics, Electrical Engineering, and Computer Science. Dr Lewak is  an avid  bicyclist and enjoys daily bodysurfing  (with no wetsuit) on the local waves. year round.  His just published kindle book ("A Scientist's God" ) proves, using scientific methods and arguments, that an intelligent creator exists. His Blog is at AScientistsGod.com